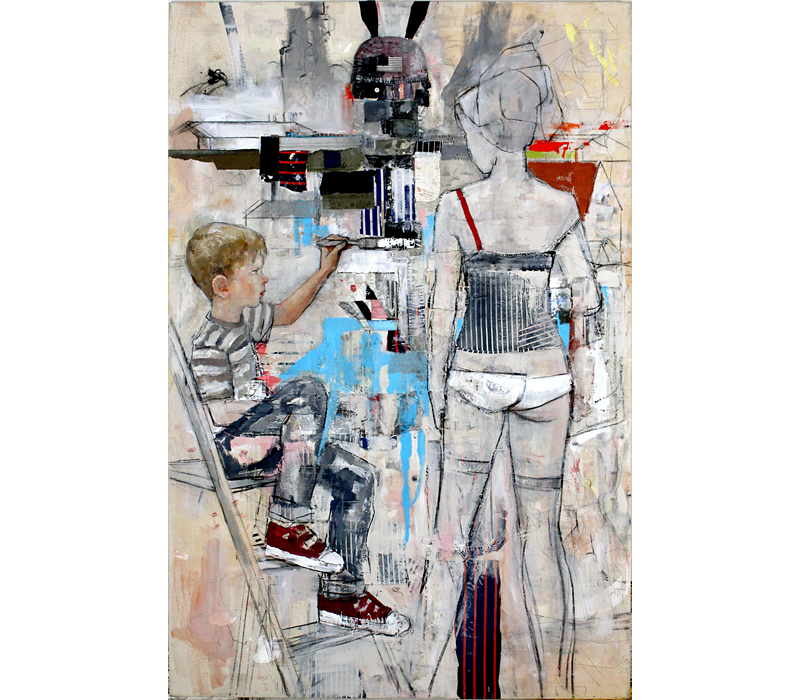 Tell me a little about yourself and your background?

I was born in Washington DC in 1953 and grew up in McLean,Va. during the Cold War era. My mother was an Army brat and graduated from Georgetown University where she met my father, a DC native and World War II vet who began his career at the Pentagon when I was young. My mother later worked at the CIA. The military industrial complex forms a background hum in my work as ordinary as mowing lawns on summer weekends. The Cuban Missile Crisis had a deep effect on my childhood. I grew up somewhat traumatized by it and carried around the thought that I might die in a nuclear holocaust at any moment. I had nightmares about it well into my late-20s.

How did you first become interested in art and why you decided to become an artist?

I always drew. I bought a set of oil paints when I was 12 with my birthday money. My parents didn't buy me art supplies because I think my father was worried that I might become an artist. Still, I was always the one given the job in the classroom when something needed to be drawn, and I enjoyed art class all the way through school. When I was 17 I was taking an English class in the Romantic poets in high school. That affected me. I was also struck by the music of the late 60s that had a message about war and our society. I thought – I want to express myself! I need to become a writer or an artist. The artist part won out, though I do write as well. Despite my interest in "message" I never made any anti-war art or politically didactic sloganeering work. Mine was more about our social constructs. I wanted to talk about what was being hidden behind the facade of cheerful (white) suburban normalcy.

Where do you get your inspiration from?

My work builds on itself. One set of paintings will often open up ideas for the next set. Conversely, I will sometimes just close out what I have been doing and go in a different direction. The ideas just pop into my head. But once I start working on a new canvas the painting takes over and sets its own needs. I have to follow it. 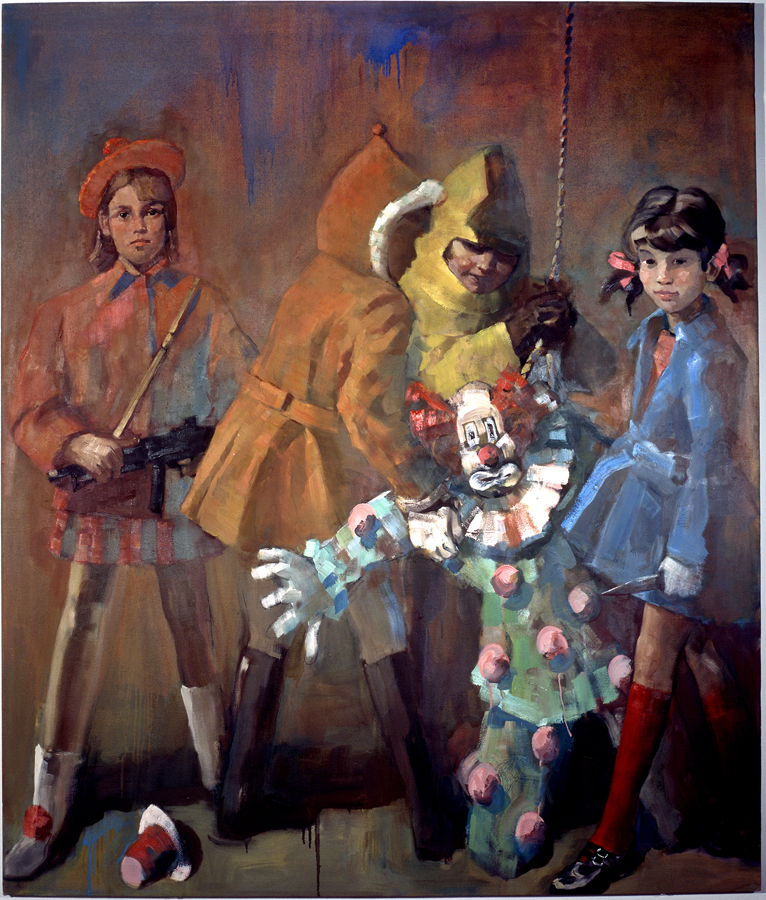 What other artists have been inspirational to you in your work?

The entire history of art is an inspiration to me. Plus the "disposable art" we find in pamphlets, illustrated manuals, and advertisements. Also, the timeless art of children's illustration. All these vernaculars are interesting to me. But, I learn a lot from the greats. Not that I try to paint or draw like Michelangelo, Ingres, Degas, Cezanne or Egon Schiele, but they do let you know how good art can be. They set a very high bar. I used to copy their drawings when I was in art school.

When did you start using the figure and specifically the female girls in your paintings?

In 1970 when I was 17 I made a painting of two young "hippie" kids. A boy and a girl. It won top price in a state-wide art show. Boys and girls have been in my work since the beginning. I have made a lot of images of young girls (as well as adult women) because the female in art and in our society is shrouded in so many layers of cultural and social constructs. The female has been the fertility figure, the Virgin Mary, the goddess, the innocent child, the temptress and the victim. With the exception of The White Papers, my females have basically been in charge in the image. They are either bigger than the viewer and staring you down or they may be holding guns or directing the action. I grew up surrounded by sisters and strong female figures in my life. At the same time, the males in my paintings are often pathetic or foolish, literally clowns, or just curious boys.

How important are drawing and sketching to your practice?

Almost everything I do begins with a thumbnail sketch. I play around with a basic idea with pencil and paper and then go from there if I think the image would make a good painting. Or sculpture.

How has your work changed in the last few years?

Working in mixed media is a very notable change in my work from previous series. In 2016 I began adding collage elements to my paintings. Usually cut up men's shirts that I buy at thrift stores. I glue them on the canvas to create hybrid figures of pencil, charcoal, acrylic and oil, or to add unrelated textures. I want the work to look like it is in the process of rising into being and falling into decay at the same time.

What are your currently working on in the studio?

A portrait commission of three adorable young children ages 2 to 6. With my portrait commissions I visit the family, meet the kids and take photos of them. In taking the photos that I will be working from I look for something natural in the subject. I don't pose the children. I like capturing a candid moment. Other than that, I'm working more figuratively than I was last year. Last year I was breaking images down – now I'm trying to put them back together. 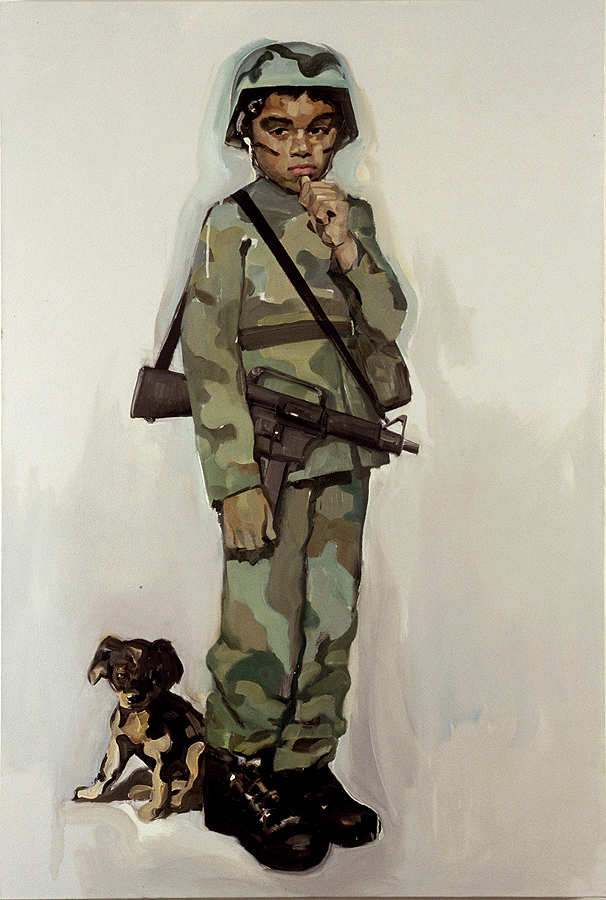 What has been your most memorable moment you have experienced as an artist?

There are so many great moments. Some horrifying and some amazingly reassuring. When I first exhibited The White Papers in 1982, (a savagely violent and satirical cartoon book about the JFK assassination, Manson Murders, Vietnam and the killing of John Lennon) suddenly people wanted to know who I was. That was a great moment. I truly went from nobody to some body. But there also was a night in 1994 at Illinois State University, during a panel discussion about my paintings on view, when a woman from the audience slammed my microphone on the table and screamed at me about my work. The room cheered her. It was an art school but the audience was mostly from the social studies department and really didn't understand that my paintings were fictions and not real. They couldn't make the leap. It was the worst night of my life as and artist. I've also had major artists tell me how much they admire my work and how important they think it is. I wish they would say that in print though, instead of privately. Hah. Still, it's nice to be introduced to an important artist and find out that they have long been a fan of your work.