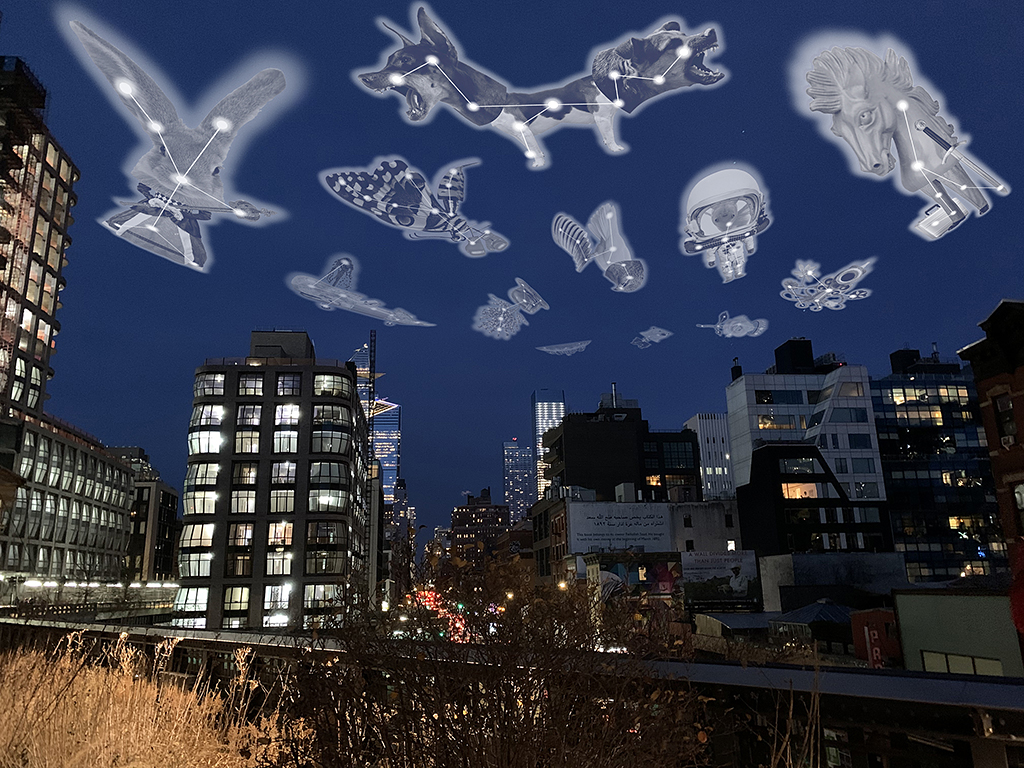 Tell me a little about yourself and your background?

I'm from the Lower Hudson Valley, in upstate New York—Tomkins Cove, Stony Point, just south of Bear Mountain along the Hudson River. It was a small town, the kind where as a kid you play baseball all day in the summer, and then ride your bike afterward to the grocery store to get a cold bottle of Coke to cool off. It was great when I was young, but when I got into my teens I got restless. I had come down to New York City for the first when I was about eight-years-old and knew right then that this is where I was going to live.

How did you first become interested in art and why you decided to become an artist?

I've told this story before, but when I was four or five-years-old I used to sit with my grandfather and we would draw ships on the water with magic markers on paper. He taught me how to make the blue waves under the ships, and the seagulls flying above them by drawing the letter "V" and bending out the edges just a little. One day I did a drawing of Noah's Ark, with all the animals on board. Remember, I was about four or five, and when he came into the room and saw what I had done, he picked up the drawing from the table and put it right up on the wall in the kitchen. He patted me on the head and told me that I would be a famous artist one day—and I believed him.

I took private painting lessons a few years after that, with a local painter in the area, and then went on to an art college after high school. That was a real game-changer for me, as it opened up a world that I had not seen or could truly imagine before.

Where do you get your inspiration from?

I get asked that a lot, and never quite know the answer to it. Sometimes the inspiration for a particular artwork or idea comes as an epiphany. I'll be taking the subway somewhere here in the city, or driving on a backcountry road, and then it hits me like a bolt of lightning. It seems to come from nowhere and is almost a perfectly formed concept. Other times, random ideas that have been ruminating in the back of my mind find their way into my sketchbooks and then I begin to develop them in various stages. Some will make it all the way to completion, but many die on the vine of course.

What other artists have been inspirational to you in your work?

There have been many artists that have inspired me over the years. Early on, when I was young, the Impressionists were very influential. I think I was inspired more by their rebelliousness as much as anything. The same goes for the Dada artists, and the Surrealists. A bit later, in my teens, I would say that Donald Judd had a deep affect on how I thought about art. Judd and the other Minimalists, as well as Kosuth and the Conceptualists intrigued me. Strangely enough though, it was an artist that is anything but minimal that might have had the most profound affect on my work.

When I first moved to Brooklyn I was still mostly painting. I had conceptual ideas within the work, but most of it was realized as paint on canvas. One day I went to the Jonathan Borofsky retrospective at the Whitney Museum… and I hated it. I can’t emphasize how much I despised it. I don't know why, but I did. But then I couldn't get it out of my head. I went back three or four times to the exhibition, mostly to look at it and scoff, but every time that I went I opened myself up more to it. It wasn’t his haphazard installations, with papers spewed all over, or the hammering-men kinetic sculptures that got me, in fact that’s what turned me off to it originally—it was the one lone stack of number counting that he labored over for years that did it. He developed his own time-stamp system that allowed him total freedom to create within a universe of his own making. It wasn't his art per se, that inspired me, it was the tight conceptual, ever tightening and at the same time ever expanding numbering system. So, somewhere between Judd and Borofsky I found a door to walk through into my own work. 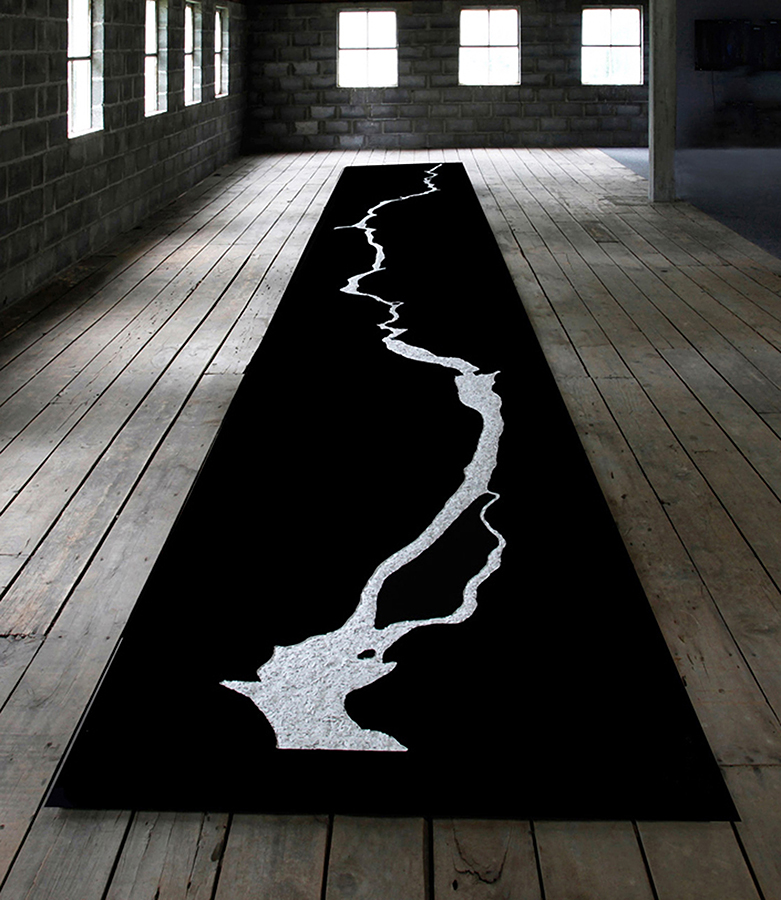 What can you tell us about your work and your creative process?

I consider myself to be a conceptual artist. Wikipedia calls me neo-conceptual, meaning I'm a next generation conceptualist, but I think that’s because it's difficult to place any moniker on an artist today, and I guess I fit best into that paradigm. I say that I’m a conceptual artist simply because my work is concept and idea drive, and the materials are secondary to that.

I'm not myopic in my work, in that I’m not singularly focused, I try to be diverse in my art creation. I'll create a body of work, variations on a theme, and then move on from there when it reaches its conclusion.

The most important thing that I can say for me is to always be creating, and always doing as well. Thinking about the work is essential, of course, as it's important to let ideas grow in your mind, but it's equally important to get them down on paper, or in three-dimensional form to begin to actually visualize them, to see them in real life. I don't necessarily welcome success in a piece—as success is very difficult to define—but nor am I afraid of failure. The only thing that scares me is being sedentary, paralyzed by perfection I call it, and I fight very hard never to let that happen.

What are you currently working on?

I’m constantly writing down ideas and developing concepts. That process never stops, no matter where I am, or what else I’m working on. I've spent the past two years with a documentary film production crew. They followed me from Venice, Italy at my exhibition at the biennale, to Karachi and Islamabad, Pakistan where I then showed at the Karachi Biennale. In the summer of 2018, I was in Seoul, Korea for an exhibition and the film crew and I went up to the Civilian Control Zone at the Demilitarized border. We were the first Americans to spend time up there. We had to surrender our passports to the army to do so. I was there to put an augmented reality artwork over the DMZ between North and South Korea. The film crew was there to capture it for an upcoming documentary entitled "The Tiger Horse." That's the name of the artwork that I created. It should be completed for release by the end of year.

Tell me more about it.

The documentary chronicles the journey from my Brooklyn studio to Seoul, and then up to the DMZ. While we were filming the last scene, the South Korean Army took in my crew and me. I was standing in the middle of a rice paddy, mere yards from the electrified fence, with a drone flying around me when the cameramen began disappearing one by one. I didn't know what was happening until the army van pulled up and the crew was all in the back. I was eventually taken too, and while we were in the van heading back to the base, we frantically swapped out all the SD cards from the cameras. We replaced them with footage we had filmed a few days before of banal things like flowers and kimchi pots. The army deleted the decoy footage, but the director was able to upload all the proper footage from the swapped SD cards to the AP cloud, and we saved it all for the film. It was actually an exciting experience.

Along with the documentary this year, I'll be traveling to Dubai in April to show my work, and to also meet with people and institutions for a large-scale project tentatively scheduled for 2021.

What has been your most amazing moment you have experienced as an artist?

There have been so many amazing experiences over the years, from my first New York group exhibition, with a hundred other artists so many years ago, to my first solo museum show eighteen-years after that. Each has made an indelible mark on me.

Most recently though, I was at an opening in Chelsea, doing the rounds on a Thursday evening, when a mutual friend introduced me to a friend of hers. The three of us stood in the gallery talking about the exhibition we were attending, and then about art in general and ourselves. This person was a recent MFA graduate of a midwestern university and we talked for a while, and then I gave my full name and contact information before moving on. When I gave my information, the person looked up at me and said, "I know your work well, we studied you at my university. They taught about your work in my MFA program," and then went on to talk about a few of my pieces and asked me questions about them.

For me, that moment wasn't about the recognition or the accolades, it was about just being included in the art dialogue. Even if it was just one university, one program, one young artist, it didn’t matter. Being a part of the dialogue is more important than any pats on the back, or sales money in the wallet. It really is. And yes, it has happened before, but I will say it never gets old.

Where can we see your work and any other projects you are working on?

The quickest and easiest way to see my work would be by going to my website or to search me online.

Here's a recent New York Times article about my “Ascension” augmented reality installation:
A Walk on the Frontier of Art, Where the Sky Is the Limit